Sourcing all our produce locally we change the menu every 2 months to keep it fresh.

Summary:
Table 7 that invitation has duly been accepted and I tell Victor and Kelli to expect to see me soon to liberate some of those secret ingredients!

As a resident of Waltham Forest I’ve always prided myself on supporting local business. So when i was invited to review a modern European eatery situated in the northern part of the borough and meet the chef responsible for creating these innovative and original menu ideas, I eagerly accepted the offer.

As a self-confessed ‘foodie’, i pride myself on being well acquainted with most of the quality restaurants in and around town. But on this occasion I had to make a startling admission, It’s one place I had yet to patronise.

Simply named Table 7, it’s an acclaimed modern European restaurant that boasts a menu of traditional dishes with a unusual twists, all served up by the charismatic owner and head chef, Victor Garcia. Based in the heart of the E4 district Table 7 is located on the Chingford/Essex border. Often described as sophisticated dining at it’s finest, Table 7 is continually receiving rave reviews from both customers and critics alike.

Upon arrival, the very friendly manager and co owner Kelli greets me like an old friend and after pleasantries are exchanged, she proceeds to introduce me to the head chef and owner Victor Garcia who is busy working in the place where the magic happens. Smiling warmly, Victor insists that we have met before and by a series of deductions we conclude that yes we do know each other by association and yes Waltham Forest is very small!

Once guided to our seats we get to ordering straight away, it’s a tough choice but after much deliberation my elected date for the night opts for the lightly battered fresh Calamari served with a home made sweet chilli sauce, whilst I choose the three bird terrine served with toasted Ciabatta. As our starters are being served I ask Victor why he became a chef, ‘It’s a really weird story’ admits the 39-year-old father of two.

‘I was born in Colombia and with my family and we came over to England when I was 9 years old. By the time I’d hit my early teens the relationship with my parents completely broke down. So much so that by the age of 15 I was placed in the care of the local authority. I was getting up to all the typical things that teenager’s do and one night I wanted to go raving.

The social worker on duty had had enough, she locked the doors and banned me from going out, I told her I just wanted to go meet some girls and she replied, “if you really want to be a hit with the girls learn how to cook!”

“If you really want to be a hit with the girls, learn how to cook”

Her words struck a cord with me and that was were the interest in cooking came from. So I drifted for a little while, then I enrolled into Westminster College, I dropped out after after a year then at 17 I walked into City Rhodes (the Michelin starred restaurant owned by celebrity chef Gary Rhodes).

I didn’t even know who he was at the time but he took me under his wing and trained me up; I ended up staying there for 3 years. After that I managed to get a job as a personal chef for (fashion designer) Tommy Hilfiger on his private Island, Mystique, that was an amazing experience. It’s where the ultra rich take their vacations.

I was employed to prepare meals for Tommy Hilfiger and his guests, which at the time included Mick Jagger, Janet Jackson and Enrique Englasias. Being a chef on a private Island sounds idyllic and sometimes it was, but I soon got bored. It’s a very small island and after a while there is not much for you to do. So after a year I returned to the UK’.

“I didn’t even know who he, [Gary Rhodes] was at the time but he took me under his wing”

At this point our friendly host Kelli reappears and enquires how we got on with the starters. If the answer was based on visuals alone then starters would be rated at an impressive 10/10 and I can confidently say that the terrine tasted just as good as it looked, the portions were generous and mouth wateringly good. Judging by my elected dates empty plate of Calamari only confirmed what I thought, that hers looked and tasted just as good as mine, but I still asked for her verdict and she replied ‘yes the Calamari was absolutely delicious’

Smiling at our verdict kelli takes down our order for the mains. I decided to be daring and come out of my comfort zone. Usually when I eat out I only choose chicken as I’ve always seen it as a “safe option”, but this time I threw caution to the wind and ordered the 3 Pork Trio with vegetable mash and my elected date went for the salmon.

After our main orders are placed, I asked Victor about life after his stint as a personal chef in Mystique. ‘Once I returned I set myself a target of starting out on my own. I wasn’t sure about what angle I was going to take so I decided to take a trip back to Colombia and learn about South American cuisine’. Revealed the father of two .

‘Since leaving the country at 9 I’ve had no association with the country whatsoever, so it was my personal goal to find out more about my culture and heritage. I managed to get work in some of the top restaurants in the country offering my services for free, I loved it there, I embraced my country fully and learnt how to cook authentic Colombian food.

I came back to the UK with a purpose and a goal, and that was to open my own restaurant with a European/Colombian fusion’. Our mains arrive and Victor has whipped up a culinary storm in the kitchen, again visually perfect. My 3 pork trio has me literally mopping the plate and asking for recipes.

Generous portion sizes seem to be the order of the day and the presentation of each dish served is second to none. Laughing Victor politely ignores my requests for his cooking secrets and tells me that when he returned from Colombia he took up residency as head chef at VK Lounge the predecessor to Table 7.

“I tried the South American/ European fusion but that didn’t work so I stuck to what I knew best, which was modern European food”.

‘When they [ the owners at VK Lounge], decided to sell up I saw this as a perfect opportunity for me to set up on my own and I decided to invest in the restaurant. Kelli and I took over and started with a brand new look and menu, I tried the South American/ European fusion but that didn’t work so I stuck to what I knew best, which was modern European food.

At first we were stuck for a name but my eldest daughter who was 8 at the time said ‘Daddy why don’t you call the new shop Table 7, because 7 is a lucky number and it’s a name that you will never forget. The name stuck and Table 7 was born. We decided to keep the menu simple, focusing on traditional European meals with an unusual twist.

Sourcing all our produce locally we change the menu every 2 months to keep it fresh. Fast forward 6 years and we are going from strength to strength so far so good with rave reviews from food reviewers and national newspapers. Kelli again returns and asks if we would like to see the dessert menu politely we decline, as we are both very full even though what’s on offer looks temptingly good.

She smiles and replies ‘now that you didn’t have dessert it gives you a good excuse to come back again!’ Nodding in agreement I return to victor and as I am about to leave I repeatedly ask him for some recipe secrets for the dishes that have been teasing my taste buds all evening. He laughs declines to give me any tips but agrees with Kelli that if we like the food that much will just have to return.

Table 7 that invitation has duly been accepted and I tell Victor and Kelli to expect to see me soon to liberate some of those secret ingredients! 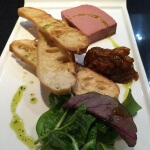 This author has not added a biography. Meanwhile Michelle Martin has contributed 1 posts. Click here to view them.

Discover our solutions for events promotion and publicity. We're here to help.

Get listed and instantly get your venue out to millions. We can drive bookings direct to your venue.